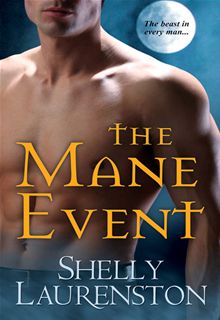 
A proper full blown Paranormal Romance - and I have to confess my first shifter romance - had me at hello.
Mace wants only one thing after twenty years being a in the navy SEALS, he want his all but girlfriend from private school, Dez, and wants her for the rest of his life. The way he sees it his friend from when they were fourteen has to be available for life, he's spent long enough nights fantasizing what came of that girl. Now that he's back in town he finds Dez has changed, but not for worse, sure she's about as tough as a cookie, but so delicious she melts in his mouth. Of course some problems arise when he wonders just how she's going to take the fact he's shifts into a Lion when the occasion calls for it.
Dez on the other hand not quite so sure what to do with the 'from scrawny 14 year old to big and strong SEAL'. Sure she's drawn to the guy, but has no desire to jump in for a one nighter with the rich and slightly odd Mace Llewellyn, from the super-rich Llewellyns. She doesn't want complications, being a cop surrounded by platonic relationships with men is enough for her, and she's determent to keep it that way, no matter how Mace makes her feel.
The book has two stories the first the one of Dez and Mace's - which is absolutely amazing and gets full on five stars from me, for witty writing, snarky comebacks and such steamy sex scene you're blushing while grabbing on to the book.
Second story is that of Brendon, who is also part of the Llewellyn Pride, the story continues where the first ends with all the same characters and setting, which makes the shift to another story easy, and fun to read. 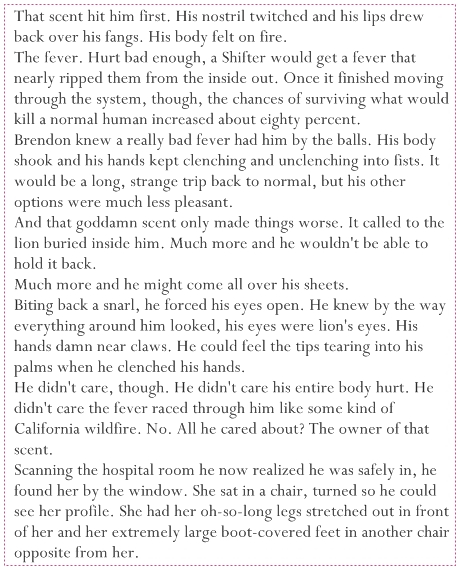 Brendon and Ronnie Lee's story isn't as strong as Mace and Dez's though, and as much fun as it to see the two of them fall in love it doesn't have the same strong back story as the first story. Out of this second story the best part is most definitely Ronnie Lee as smart talking, take no shit kind southern girl, and wolf shifter, who knows how to have real good time but has decided to do her darn hardest to settle down with a real nice wolf, for the rest of her life. Which gives Brendon, a lion shifter, enough to scheme about to win Ronnie's heart and mind over.
The second story drops one start from the total for the book, but in all a real good read, and if you haven't read Paranormal Romance before be prepared to laugh out loud and blush, 'cause this is as funny and detailed as they come.
Rating :