REVIEW - ONE FOOT IN THE GRAVE - NIGHT HUNTRESS NOVEL 2 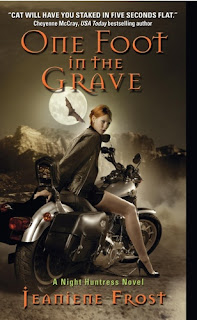 It's rare that I come across a series where the next book is better than the first, but One Foot in the Grave sure is!

As we know what we do from the first book, we already know Cat and how she operates, so getting in the groove of this second novel is like stepping into old boots, erm, in her case stilettoes, as she goes after vampires who've been naughty.
In the first novel we saw Cat come to terms with who she is as half human, half vampire, an accident, as her mother was raped by a recently turned vampire. She also meats the Master Vampire, Bones, who trains her, works with her and sparks keep flying due to hate and love. As Cat falls fully in love, she has a tough decision to make at the end of Book 1, and now in the Book 2 she has to live with the consequences of her choice.
It's been four years since she joined the task force, her life goes on its normal path, until her one and only friend gets married and what do you know Bones appears as well. 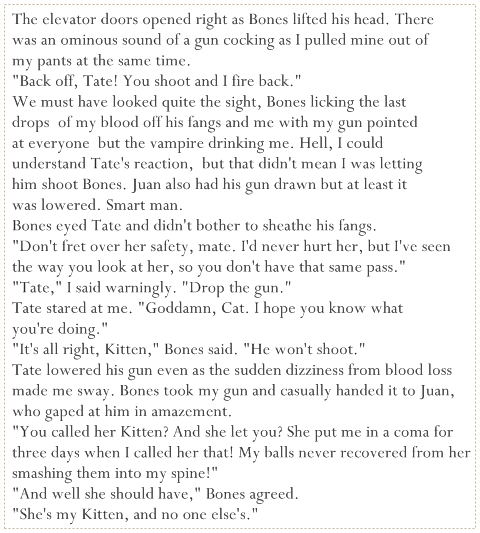 Reading what Cat's life has become is fun, and part of why I truly liked the book! Her interaction with her team is witty and sort of macho, the supporting characters are a hoot and add more to Cat as well.
But with Bones appearing all goes haywire for her, as she keeps slipping and realizing she never did stop loving him. 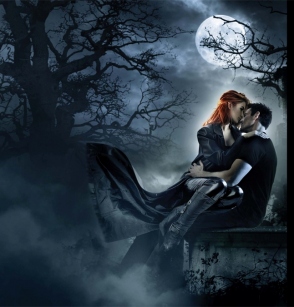 Delicious chase begins as Bones has no qualms about going after what he Does want - which is Cat, he's found her and he's not about the let her run again. Seduction being his best weapon againt runways.
Juan, Cooper and Tate are a great addition to the book, all of them having strong types they play, slightly raunchy but all business.
More secrets come out as Cat also faces the fact that there is bounty on her head, as well as someone want to have a Cat Half-Breed Trophy in their collection.
There is no lack of slashing, fighting and, well, sex in this book chapter 32 Whoa! especially.
( Chapter 32 of this book is considered one of the hottest sex scenes ever written in a paranormal romance in most circles. )
Rating :
☆ ☆ ☆ ☆ ★
Really good, liked it a lot!
Started Reading : 9th of July 2011 : day
Finished Reading : 10th of July 2011 : day