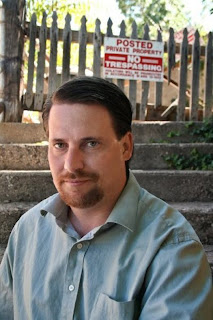 Joel M. Andre was born January 13, 1981. At a young age he was fascinated with the written word. It was at fourteen that Poe blew his mind, and Andre began to dabble with darker poetry.

Between the years of 1999 and 2007 Joel was featured in various poetry anthologies and publications. In 2008 he released his first collection, Pray the Rain Never Ends.

Knowing there was something deeper and darker inside of his soul, Joel decided to take a stab at commercialism. Releasing the dark tongue in cheek, A Death at the North Pole, created a dark world among the death of Kris Kringle. Ultimately providing a tale of redemption.

October of 2008 saw Joel release his second book, Kill 4 Me. A tale in which a woman is haunted by a vengeful spirit through text messages and instant messaging.

Taking some time off and doing a lot of soul searching, Joel took things in a new direction and dabbled in the Fantasy Genre with, The Pentacle of Light. The tale dealing with five major races battling for control of Earth, and the acceptance of their God.

Finally, after missing his detective Lauren Bruni, he released the book The Return in October 2009, this time moving the action from the North Pole and placing it in the small Arizona community he was raised in.
Andre’s latest book is The Black Chronicles: Cry of the Fallen about a dead man who seeks revenge on the woman that tormented him in peaceful Northern Arizona.

Currently, he resides in Chandler, AZ.
You can visit his website at www.joelmandre.info

Niina : Welcome to For The Love of Reading, Joel, I’m glad you decided to stop by!

Joel M. Andre : Thank you for taking the time to sit down with me Niina. You run a beautiful website and I couldn’t be happier to be here.

Niina : Thank you, Joel, I do love my blog baby. ;) Let’s get started! Can you tell my readers here 4 fun unknown facts about you so we can break the ice? 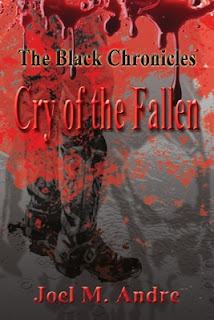 Joel :  Four random facts that people might now know. I can give this a shot.  1. I do like paranormal romances, but hate vampire romances. 2. I am a cheap date. Taco Bell will always win my heart. 3. When I was 17, I broke my femur falling out of a Taco Bell drive thru window. 4. I love mellow music, but will listen to Marilyn Mason, Tool and similar bands when I write.

Niina : Tell us little about your newest book, what’s it about?

Joel : My latest book that is out on the market is, The Black Chronicles: Cry of the Fallen. It revisits Lauren Bruni from A Death at the North Pole as she tracks a killer plaguing a small town in Northern Arizona.

Niina : So, why did you pick horror genre?

Joel :  My father always loved horror. When I was growing up, I was surrounded it and I found it to be a pretty open genre.

Niina : How would you define horror fiction?

Joel :  Over the years, a number of things that wouldn’t have been considered horror are being lumped into it. Horror fiction should have elements of terror in it. I think it should make you uneasy and have your heart pounding. I’ve seen vampire romances being listed as horror novels and I disagree with that.

Niina : What characteristics do all your heroes have in common in your novels?

Joel :  Their humor is very dark. I also find they are strong, intense characters as well. 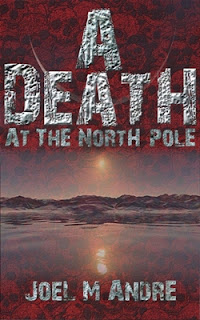 Niina : What is your favorite way of marketing your book?

Joel : I love giving away titles for free. To me, the goal is to get people to read. While I know some people are in it for the money, I am all for just having people pick up a title and to get lost in the words. I know people who are in it to make money and they often find out that it takes a lot of hard work and time spent on promotion to make it happen.

Joel :  I think anytime a person tells you that your book caused them to lose an afternoon as they were lost in the pages is a good thing. I’ve had several people pay me that compliment; I don’t think there is a need to single them out.

Niina : I you could only read 5 horror books for the rest of your life what would they be, and why?

Niina : Good choices! Now, what makes you feel like you’re reading or have read a truly amazing book?

Joel :  If it captured my attention to the point I couldn’t put it down. The details need to be there and it should be a visually stunning experience.

Niina : Now, before we finish, here are some Quick Fire Questions:

Niina : Thanks for visiting the For The Love of Reading, Joel! Any news would you like to share with your readers , or websites they can check out?

Joel : I plan on releasing a new book this summer. For more information on that and to keep up to date with me visit www.joelmandre.info. I cover a number of topics there. Of course, if anyone has articles they need for their website, I am available for hire at www.needanarticle.com as well.

Are you a fan of the horror genre?
Now would be a great time to ask a horror author some tips or pick their brain. ;)
Don't hesitate to leave a comment and Have a Great Weekend Everyone!

Your hostess, that's me!, is currently most likely sipping a girlie umbrella and pineapple drink by the giant turquoise pool or strolling in the white sands by the Atlantic ocean in Cape Verde - but you can be sure I'll reply to you all as soons as I get back next week! 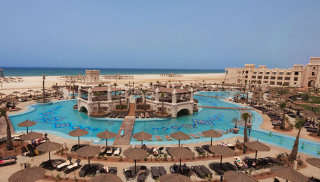