GUEST BLOG - HOW TO WIN A VIKING'S HEART 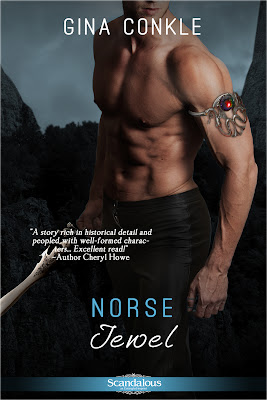 How to Win a Viking's Heart
by Gina Conkle

The fine literature of our day abounds with blaring appeals and blatant advice.  One minute in a grocery store checkout and the shelves shout at you:
“The SEX MOVE that brings you closer”
“Why Guys Pull Away”
“The crazy lie I told to get a boyfriend.”
With such nuggets of wisdom blaring at you, it’s easy to see how age old appeals of sensuality and tenderness get lost in the mix. The simplicity of a hard man letting down his guard to a soft woman are missing.
Now, as a writer and lover of Viking history, I’d be the first to admit those alpha males of old didn’t always strike the right chord when it comes to love, sex, and romance.
And those three are so different, aren’t they?
Yet, like three parts of a braid, each is necessary, even integral to life.  Viking sagas knew this, thus, love, romance, and sex can be found in liberal, if unequal, doses alongside intense battle scenes.
Because the Vikings were, if anything, a passionate people.
To navigate the Sagas, and Viking sensuality, a modern woman needs to understand a few things when digging into Norse literature.

1. The Pleasure of Beholding – This term shows up in the sagas. Yet, compare it to Roman and most western European traditions which lean toward the masculine viewpoint, placing women as erotic objects to be viewed.  Desire, and the joy of witnessing a fine form, is largely the province of men ogling women.
Not so the Norse.  Iceland’s sagas spread the visual wealth.  Women take as much delight in viewing a handsome male form.  Of course, the scale tips the other way with men delighting in lovely women. Yet…
According to historian Jenny Jochens, when it comes to the sagas and sex “…an almost identical vocabulary was deployed for both sexes.”
The lesson: Eye contact speaks volumes.

2. Jewelry placement – Archaeologists and historians alike claimed Viking women wore their brooches high on the shoulder for the practical purpose of pinning up garments. The pesky problem: lady’s burial sites were exhumed and studied, but those brooches kept showing up lower on the female anatomy --- closer to the bust. Researchers began to realize that during the Viking Era (loosely defined as AD 750 – 1030/1066), Norse women wore their brooches lower, emphasizing their breasts.
The lesson: Emphasize your attributes.

3. Enjoyable Sex – Admonishments of duty in the vein of “…lay back and think of England…” won’t be found in the sagas.  Norse women liked sex.  The sagas tell of men laying their heads in a woman’s lap, a sign of tenderness and trust.  Sometimes this came from love, sometimes from lust. As a culture, they could be promiscuous. But don’t be fooled: Viking men weren’t the only ones indulging in extra-curricular activities. Viking women acted on their basic instincts as often as the men. And as the case will be, painful consequences resulted

Yet, there’s plenty of tender sensuality along the way. Norse words and phrases remind us that being with someone isn’t about a glaring headline or false neon colored promises as what graces today’s magazines. To illustrate, take a look at some Norse phrases (as pertaining to sex) found in the sagas:

*to amuse oneself (at skemmta ser)
*crowding together in bed (hviluprong)
*enjoy him (njota hans)
The lesson: Enjoy --- with caution.

If anything, may the art of subtlety in that ancient dance of men and women open your eyes to romance…even Viking romance.
Thank you, Niina, for hosting me on your blog.  I appreciate that you opened up your site to me and to your readers. 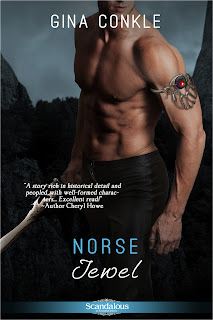 A stolen woman of rare qualities…

AD 1022…Helena longs for freedom. The Frankish maid wasn’t born a slave but marauding Danes have taken her. She’s desperate to escape their camp. Her savior comes as a fierce Norse chieftain, Hakan, who takes her to the far, icy north.
A powerful warrior who’s lived by the sword…

Hakan wants to lay down his sword and live a peaceful farmer’s life. Betrayal has left him cold to other women, yet his heart thaws to clever Helena. Her tender ways lure him, weaving kindness into his hard life. But, happiness is short lived. Old loyalties and deceit vex the warrior, calling upon his sword arm.

A clash of cultures amidst a kingdom in transition…

War erupts…a kingdom’s in the balance. Can Hakan defend his homeland and keep the woman he loves?

Gina’s a lover of history, books and romance, which makes the perfect recipe for historical romance writer.  Her passion for castles and old places (the older and moldier the better!) means interesting family vacations.  Good thing her husband and two sons share similar passions, except for romance…that’s where she gets the eye roll.  When not visiting fascinating places, she can be found in southern California delving into the latest adventures of organic gardening and serving as chief taxi driver.