Really?  I think the words cops and cuffs says it all…lol.  There is nothing sexier than a man in uniform who can work a pair of cuffs as easily as he can turn the key in a car’s ignition.  Those small metal restraints give him some power, and you have to admit your knees wobble a little at the thought…or is it the possibilities?

I think that it’s because the officer with the handcuffs has the power and he can wield it and control the situation, but he doesn’t need to use something as dangerous as a gun to demonstrate law and order.  That’s sexy to me.

Whew, how yummy is that?

And yes, there is use of handcuffs, between the bad guys as well as Sunny and Judson…but I won’t spoil it by revealing too much!  And yes again, Judson doesn’t necessarily wear a police man’s uniform, since he’s a detective he mainly dresses in street clothes or a suit, but that’s his uniform and it can be damn sexy!

I invite you to comment below and tell me what makes cops and cuffs attractive to you.  Is it the shift of power, the control, a man in uniform, the thought of a playful encounter… dig deep and share your thoughts.  I’m more than a little curious. 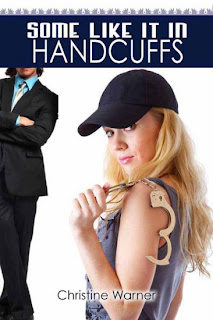 Sunny Kennedy, the only female in a family of blue blood male detectives, is determined to prove testosterone isn’t the only qualification required to solve a cold case. Handcuffed while undercover then taken to the precinct by an attractive detective, her domineering family demands she work with Detective Judson Blackwolf, or she’s off the case.

Judson Blackwolf thinks women in law enforcement should work behind the scenes. The prospect of working with his Captain’s sexy daughter doesn’t thrill him. He only agrees in hopes of solving the murder of his one time mentor’s daughter. Once the case is over, he’s moving to Montana to heal his wounds from the loss of his last partner.

But when their investigation takes a dangerous turn, Sunny and Jud soon realize their feelings for each other cannot be denied.

“This isn’t how I wanted it between us.”  Judson grabbed the neckline of her sweater, dragging her body to meet his with a solid thump.  Sunny licked her lips in answer to the question in his eyes.  He lowered his head to move his mouth over hers.
Sunny closed her eyes, a small whimper escaping her lips.  She didn’t want it like this either, but that wasn’t possible.  Unable to resist her attraction she accepted it wasn’t an affair, or a long distance romance she craved, but for him to love her back.  It was all or nothing for her.  Her heart sank.  She accepted this as their goodbye kiss.
With no thought to what was happening upstairs, Sunny rose up on her toes demanding more.  Her lips pulsated against Judson’s.  When his hand trembled against her cheek in a soft caress she lost touch with reality.
“Judson.” Sunny’s weakened body drifted farther into Judson’s as his fingers glided down her arms, pulling them to her sides where their fingers intertwined.  He forced them behind her before his tongue thrust into her mouth.
Their bodies molded together, she heard her own heartbeat and his as well when he curved his fingers around her rear and squeezed.
That’s when the click of the handcuffs against her wrist connected her to the handle of the locked cupboard.
“What the hell…Judson?”  She looked up at him, her knees shook, her body still inflamed with fever.
“Like I was saying, you wait here and I’ll go upstairs to check it out.  Backup’s already been called, so you’re safe until your brothers arrive.”  Judson winked before walking toward the steps to the third level.
Once he reached them he turned toward her and smiled.  “Gotcha,” he whispered with his notorious grin.


My Blog/website / My Twitter / My Facebook Page…
stop by and give it a LIKE to keep up on what I have coming up. I love to hear from readers and other authors!