"Eleven hot erotica writers tantalize and tease your every desire with original erotica. Whatever your persuasion you will find something to satisfy your need for spicy stories and sensual sex. Short stories, monthly serials, sex toy reviews, sex in history articles, erotica book reviews, and excerpts from published erotica writers."


Warning: This book contains explicit sex scenes and graphic detail. Mature audiences only. Not intended for anyone under the age of 18. 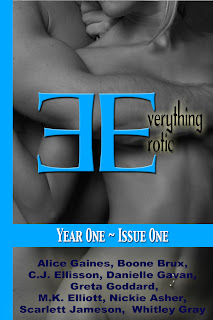 This collection is from their first month's work and a new volume will be released each month.

The first issue is where everything begins, all the stories get started and just get steamy before stating the stories will continue in the next volume! sneaky and efficient because now I have to read Vol. 2 just to keep up with what happens with Johnny and what happens in the on call room of Meredith Medical Centre. 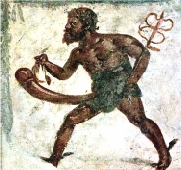 Can't help but to give a special mention to the article Randy Romans, I loved reading that - see Golden Age of Rome wasn't all about poetry, philosophy and arts, sometimes it was about a wall painting of big, fat... well you get the picture. ;) Those randy romans!

This is for you if... you like a little spice in your short stories every once in a while!

It only took me about ten seconds to come back to her with a big, resounding ‘yes’! Though I’d not written much erotica, I was published with a variety of small presses and thought this new idea sounded like a winner.
Within a few weeks of starting the blog, we were adding hundreds of subscribers. New authors were getting involved and the whole project grew legs and ran. We were producing so much great fiction, together with non-fiction articles, sex toy and erotic books reviews, the next obvious way to go was putting all of our work into eBooks so people could read all the articles in one go.

When I first started writing erotica, I never imagined it would be of benefit in my regular writing ( I also write paranormal fiction in the name Marissa Farrar ) but it definitely has. Writing good sex is all about the description. The reader wants to be taken along with every last lick, suck and nibble. They want to feel exactly what the characters are feeling and, by reading, experience the range of sensations and emotions for themselves.
I’m so much more aware now of how I’m conveying the senses of my characters to my readers. I now consciously think about every sense; the taste of salt on someone’s skin, the musky scent of a woman’s arousal, the hard ridge of muscle on a man’s stomach. In erotica, we want details. We want to know everything the character is experiencing.

I read a discussion recently about whether a virgin would be able to write good erotica. Surely, like many other things an author may write about ( sci-fi authors describing going into space/horror authors describing being eaten by zombies/historical authors describing living in the 1800’s ) just because they haven’t actually done any of it, doesn’t mean they should be any less good at writing about it. It’s a good argument, but it’s one I would have to disagree with. Writing erotica is all about the sensations and if it’s a feeling you’ve never experienced properly ( or at all! ) how can you properly convey it to others?

Sure, the type of sex we want to read about might not be quite what we’re used to experiencing—the setting is bound to be sexier, the characters are going to be hotter ( no beer bellies or saggy bits please! ) but that doesn’t mean we can’t add a little of our own experiences to our tales.

With the exception of her heels and lip-gloss, she was totally naked. Alyssa turned to face them, a smile hinting at her mouth. There was power in this. In having two men practically panting with want.
The two men’s erections strained against the thin material of their shorts, creating a pair of impressive bulges.
“Now it’s your turn,” she said.

The men shared a glance and silently came to the decision she was not fucking about.
The blond wrestled his shirt over his head. Still pointing the camera, the other guy kicked off his sandals and, one handed, tugged at the button of his shorts.

Alyssa reached a hand between her tanned thighs and started to gently rub her clit with her forefinger.
“If you guys don’t hurry up, I’m going to have to do this myself.”

The blond got to her first, his cock jutting out to meet her. He had a surfer’s body, young and lean. Though he tilted his head awkwardly with a shy smile on his lips, his nerves were not enough to stop him approaching her.

Alyssa reached her hand out toward his cock, wrapping her fingers around its rock hard length. “Hi,” she said to it, not bothering to look up to see the face the dick belonged to.
The camera still rolled.

Slowly, she got to her knees so his cock was at her mouth. Parting her lips, she snaked out a tongue, teasing its tip, tasting the small bead of salty moisture. Gently, she pushed her tongue against his slit, hearing him gasp above her. Knowing the camera was watching, she ran her tongue down its length, stopping at its base to take each ball in her mouth, sucking, swirling with her tongue. She licked her way back up again and enveloped the whole of his cock in her mouth, drawing him deep into the back of her throat.

The cameraman was behind her now, focusing on her ass and pussy and on the back of her bobbing head. She wiggled her butt at him, pushing it out, hoping he’d get the message.

He did. Holding the camera in one hand, he reached down, slipping a finger along her wet folds.  Alyssa groaned against his friend’s cock, the vibration making him tremble, and pushed her ass out further. He slipped a finger inside her tight pussy, and she moaned again.

Feeling how wet she was, he pushed another finger inside her, pumping in and out, all the while trying to hold the camera still to get the action.

Alyssa pulled herself off of the other guy’s cock, just long enough to say, “Put your finger in my ass. I love it in the ass.”

He didn’t need to be told twice. Using the moisture from her pussy, he wet her ring, and starting working the tight pucker off her ass with his thumb. Another finger pushed its way into her pussy, so she was practically impaled on his whole hand.

Like what you’ve read? Why not go and checkout the kindle blog, facebook page, or purchase the eBooks?

M.K. Elliott is the author of the Barnes & Noble best-selling collection, ‘Rescued’. She’s also had a number of titles in the Amazon top 100 for erotica, including ‘Rescued’, ‘Some Love it Hot’, and her bi-sexual vampire novella, ‘Deadly Beauty’. M.K. was born in Devon, England, where she now lives with her husband , two young daughters, a mad Spanish rescued dog and four hens. Though she has a degree in Zoology, her true love has always been writing and she now works as a full time author. M.K. writes everything from contemporary romance to steaming hot erotica, and her love of travel and adventure is her main influence in her stories.