REVIEW - HOW TO MARRY A FINNISH GIRL

"All the secrets about Finland and the Finns are finally revealed in HOW TO MARRY A FINNISH GIRL: Everything You Wanted to Know about Finland that Finns Won’t Tell You. Simply buying this book guarantees that you will: Make Out with Your First Finnish Girl in 24 Hours (or less!) ...and more!" 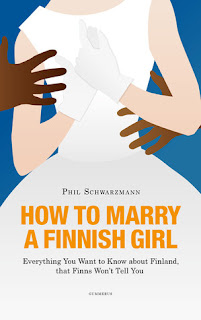 Right after "The 30-Day Guarantee" comes a small chapter "Don't let Finns read this book!" and I can see why, some might, and have, hated this book - though those people seems to lack a sense of humor, as I found this Hilarious! Seriously if you can't laugh at yourself and the idiosyncrasies of your countrymen then you are in deep shit.

Talking about absolutely everything that is a cliché in Finland, this book is something that even I cringe at at times ( probably as somethings hit close to home ;) ).

"How do you tell if a Finn is an extrovert? He looks at your shoes, not his own!"


Ummm, guilty. So there's truths there too, but the way they're told is so funny you end up being proud to be a Finn after reading the book, of course I can be bit bias as I got an American to follow me to Finland. ;)


"Congratulations. You met a cute Finnish girl on the internet. She's convinced you that Finland is heaven on earth and you should move there. Since you're not doing much with your life at the moment, and your not going to get a girl of this caliber in your hometown, you figure "screw it", why not migrate?"


And it strokes the ego a little, when Schwarzmann says the girls in Finland are beautiful and worth coming to Finland for, to endure the horrid weather, silent treatment, tiny apartments ( in the beginning called "love nests" ), endless nights during winter and the current borderline racist government party ( True Finns ).

Yes, Finland is cold and the winters are long, but he also gives great examples on what’s great about Finland, like every year you get mandatory 5 weeks of holiday, of which most people Have-To take 4 in July and one in the middle of winter.

Of course there is the learning of the most difficult language in world, Finnish... ( my husband has been here close to 7 years now and well-- it still doesn't look good ) but Schwarzmann gives few good tips about that also!


"Taking Classes: ...But if you single, you're in luck as ALL Finnish teachers are female - desparate, broke, females who LOVE foreign men. Why else would they teach Finnish to foreigners? They get men right off the boat, they are like chefs going to the market at 5AM for the freshest fish."

"Hire a Tutor: Your chances of sleeping with her are almost guaranteed. Unfortunately, they're rarely that cute."


So, why does Schwarzmann ( I got to stop using his last name now, I keep friggin' misspelling it like there is no tomorrow! It's Phil from now on... ) figure foreign men want to get Finnish girls?
Well apparently we're smart, beautiful and easy, umm... Most women in Finland are 8's, Finland has less amount of 10's than Sweden, but Sweden has less 8's... got it? I know, it gets bit confusing, I believe there is like math involved. Finnish women are easy to live with as we don't come with the daddy-clinging that Swedish women come with and Finnish women are independent even when it comes to paying for the check on a date.


"Finnish guys split the check, even on the first date! In any other culture, that's like saying to your date, "Well I guess I'm not getting lucky tonight. Bye!" But in Finland this is perfectly normal. ... She'll try and pay for her half, but resist the urge. Let her pick up the tab after she's slept with you."


Wait a minute! How come this sounds familiar??? Actually every tip this book gives about dating a Finnish girl is what my husband used. ;) Finnish guys just weren't as attentive of women, and open and flirty as my American was, how can you not love that?

I could go on and on how great this books is, and erm, how accurate in that cliché kinda way, but I suppose I'll just have to stop and let you go get your copy - and do get one even if you are a Finn, I haven't laughed throughout a book in ages! Last book that I read that was almost as funny as this was Brett Sills' novel "My Sweet Saga" where an American travels to Sweden pretending to be an astronaut.

If you have anything at all to do with Finland: in-laws, Nokia connections, considering following your sweetheart to Finland, moving back to Finland from wherever your parent's moved to, or if you came to spend a summer here once - this book is for You. Or for someone like me, a Finn way too curious about what others think of Finland...

Okay last quote, here are some pick-up lines to use on Finnish girls to get them to burst out laughing:


"Put your tongue on my flagpole and see if it sticks."


"No, that's not a Nokia Communicator in my pocket."

A great tongue-in-cheek look at how a foreigner can survive in Finland and not stick out like sore thumb, with great practical tips: like how much to drink on the public holidays, how to catch a finnish girl, how to dress and speak finnish, how to not get trapped in Finland and where to live ( I live in the finnish "ghetto", that eguals like the nicest part of Detroit ) and the crude, smooth talking accent of a stand-up comedian, spiced with the author's tweets about Finland! Like...

Wondering why only 4.5 stars? Well it loses ½ star for being to glorifying of the Swedes. :) No, I didn't just prove any author right...

P.S: I had the pleasure to be in the audience for the interview with Phil and Roman Schatz as they talked about Finnish Women, yesterday at the Helsinki Book Fair ( that was one hours of constant giggles, hence why I bought the book ). Got to meet him shortly afterwards as Phil's a friend of my husband's, and they both are American who moved to Finland due to a girl. Also he got married to his girlfriend last night! Congrast!


Here are some photos: 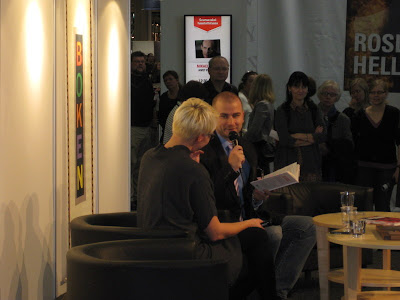 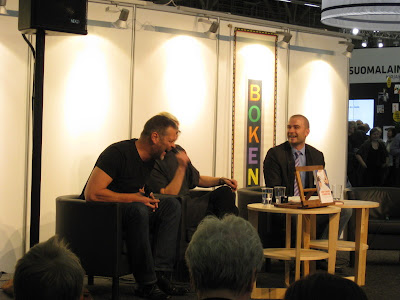