REVIEW - KISS OF A DEMON KING

"With each smoldering encounter, their shared hunger only increases. If they can defeat the sinister enemy that stands between them, will Sabine make the ultimate sacrifice for her demon?" 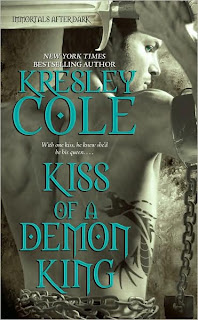 Rydstrom is a dethroned King of the Fire Demons, he and his brother who cost him the kingdom have been trying to find a way to defeat Omort the Deathless for 700 years. With the Sword that can finally kill Omort in the brothers sight they set off to fetch it, but before they can even embark, a woman appears in front of Rydstrom on a deserted road and seduces him to follow her.

Sabine, hasn't had an easy life, and growing up in her stepbrothers corrupt and disgusting invaded castle has left her, a Sorceress, wicked, evil and selfish. Her destiny is to receive the child of The Demon King to open The Well of Souls in the middle of the castle to help either evil or good to win in the coming Accession ( a Lore doomsday of sorts ). As she lures Rydstrom into his old castle, now corrupt by evil and death, through a portal, she drugs him as he refuses to buy into her Illusion and sleep with her, and shackles him into a bed in his old dungeons.

As Rydstrom discovers where he is, and who she is, he's enraged, promising to destroy her and Omort for this - and she sets out to seduce him, tease him until he proclaims her his mate and Queen and then she'll sleep with him to get his heir.  Rydstrom learns that prefers sex a little differently than he thought, instead of being kind and gentle like he has been with other women he’s tried, Sabine brings out his dominant features. As Rydstrom realizes she's his mate, confusion sets in, who on earth would give him an evil mate, related to his archenemy, he doesn't want her - but he sure as hell won't let her go. She's his, no matter the shackles, the evil tendencies, her cruelty and the fact that she's making him insane.


“She may be an evil bitch, but she is my evil bitch. And I'll have no other.”

Now, wow, haven't read a plot like this, ever. A Queen of Illusions kidnaps a demon, bounds him into her bed, seduces him to the brink of insanity and then refuses to sleep with him until her makes her his Queen so that their child can be the legal heir of the Castle.

I personally would have liked this story a bit sweeter, and the beginning was bit hard to swallow at times, as I like my heroines brave, strong and good, so rooting for Sabine was very hard at first. And it isn't until towards the end of the book when her compassion is shown that she really grows on you and it's all good and she becomes a truly great character, a quasi-evil but kind "queen" who destined to bring the women fire demons out of the meek and ignorant middle-ages.

Rydstrom I have loved since Wicked Deeds On A Winter's Night ( #3 ) he's honorable, a king, gracious but can hack down incubi like there’s no tomorrow, he's determent to get his crown back and even though Sabine is quite wicked he still sees some good in her even though she masks her tell-tale expressions with Illusions in the beginning.

Now I cannot help but to mention few things! I bet Cole used some Finnish in this book! Like the castle is Called Tornin ( Torni = Tower in Finnish ) and Rydstrom is practically a Finnish last name ( Rydström )! Go Finnish language. ;D If I ever have the chance to talk to her that's def gonna be in my guestions. ;)

If you like the Immortals After Dark series then do not miss this! And if you haven't read IAF series but you want to read this one then definitely read Dark Desires After Dusk first ( trust it's no chore ;) ) as these two books are like one book all wrapped up together.