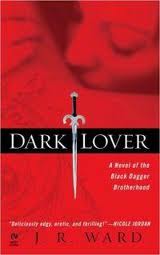 "The only purebred vampire left on earth, Wrath has a score to settle with the slayers who murdered his parents centuries ago. But, when one of his most trusted fighters is killed-leaving his half-breed daughter unaware of his existence or her fate-Wrath must usher her into the world of the undead-a world of sensuality beyond her wildest dreams"

My first Book Review will be the latest book I have read, not one of the hundreds I have read so far, but in the future I might make exceptions and review my Top Picks.

But now to Dark Lover, Book 1 of the Black Dagger Brotherhood series, which has now 9 books - which are on my list of books to read next.

I read Dark Lover in Finnish, which is my native language, and I enjoyed it so much that I finished it within 24 hours.

How the book was written is funny, and got few laughing out louds out of me, mainly due to the thinking process of the male lead, Wrath.

It took a little time to get over the names of the men in the brotherhood, but as you got into the story they seem less corny and seem to go with the image of the brothers.

Now there is quite expressive sex scenes, but they are not badly done or out of story. It is fun to read them cat and mouse around them though.

Now after getting through the first reaction to their names and accepting there is sex and it plays a fine part in the book we get to the plot.

Darius dies after asking Wrath, the vampire king who’s turned away from governing his people to live a life of warrior, to help his daughter who think she’d an orphan to survive her turn into vampire at age 25. Wrath gives him a stern no, but changes his mind as Darius dies. As Wrath visits Beth our female lead, flames lit up and the couple sleep together, which creates an interesting dynamic to their relationship, where Beth wonders just how she managed to go from a good girl to possible drug dealers lay, and Wrath has to come to grasps that he isn’t an emotionless, rude and dangerous warrior to all he meats. 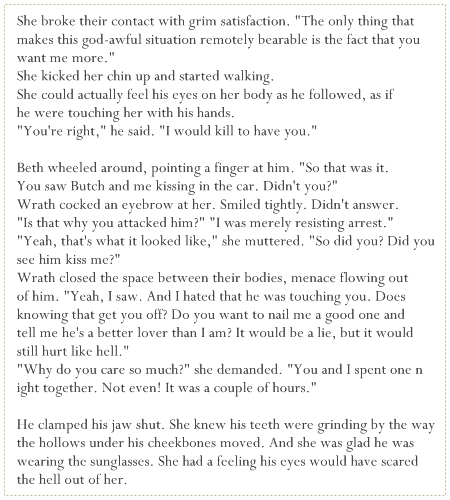 While these two dance around each other we have a mix of other characters, Butch the cop with feelings for Beth, Mr X’s plans for the destruction of the Vampire kind as he leads his own soldiers against the Black Dagger brotherhood – and let’s not forget the entertaining dynamics of the brothers.

There is nothing quite as fun to read as alpha male bantering as you don’t actually have to be there, Vishous, Tohrment and Phury give laid back quips that easily make you smile and laugh.

To all women there is something in a bad boy, and this book is filled with them.

I absolutely fell in love with this book and the world J.R. Ward created, the brothers, the vibe, the characters, their lingo - it's a joy to read with plenty of steamy moments.

I recommend this series for either Summer Vacation reading, or for darker Fall and Winter days when it’s too cold to put your nose outside. Why? Because it’s sure to get you hooked if you are into vampire and romance novels with urban fantasy twist.  ;)

I’m on my way out right now to pick up the three following books in the series.