"Being trapped in a bedroom with a woman is a grand thing. Being trapped in hundreds of bedrooms over two thousand years isn't. And being cursed into a book as a love-slave for eternity can ruin even a Spartan warrior's day." Grace is a therapist, a sex therapist to be exact, her best friend a tarot reading gypsy-blooded Selena has decided Grace needs to heal from her first disastrous time with a total tool and she tricks Grace to summon a Greek Love-Slave from an old book.

Julian of Macedon, a Spartan general, has spent near two thousand years in the book, cursed there by his half-brother, and summoned out only by women who want him for his body - and what a body! Being a demigod he's a sight aphrodisiac to human women, so much so that he is irresistible. As Grace summons him he figures out something is different this time, first Grace doesn't want to sleep with him, and second her treating him like a man awakens weird feelings in him.

As more of who Julian is revealed feelings blossom between the couple but neither one wants to admit them, better yet acknowledge them - but as it comes out that there might be a way for Julian to be free from the book things take turn to worse. It's not easy to choose life after over 2000 years of emotional torture.


❝She laughed. “There’s a lever under the seat. Pull it out and you can move the seat back.”

He tried, but he was crammed in so tightly that he couldn’t reach it.

Julian threw his head back as she leaned over his thigh, pressing her breasts to his leg while she reached between his knees. His body snapped to attention, instantly hot and hard.

When she put her cheek against his groin as she struggled with the release, he thought he would die from it.

“You know, you’re in the perfect position to-”

“Julian!” she snapped. She pulled back and saw the bulge in his jeans. Her face turned bright red. “Sorry.”

Unfortunately, she had yet to move the seat, so he was forced to endure the position one more time.

Grinding his teeth, Julian reached one arm over his head to grab the headrest and clench it tightly. It was all he could do not to yield to the fiery lust inside his body.

“You okay?” she asked once she released the seat and returned to her own.

He just looked at her. ❞ 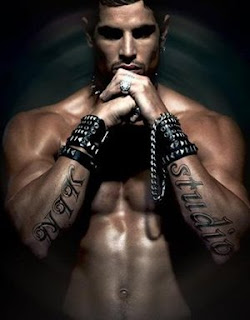 I loved this book! It sure is a hot read! I can't help but love books where the hero sets out to seduce the heroine, especially when the hero is rugged gorgeous Spartan Warrior! *SWOON* Alright let me get it together... there we go... no wait, okay, I got it.

I loved the plot, sure it was simple but with great twists! It was easy flowing to read and Kenyon writes in a way that you feel close connected to the characters, which helps so much to see the world and get immersed in it.

Fantasy Lover was deliciously sexy, dark and tempting and a surprise very funny quick read! Julian's out-of-place-ness, if one can use that as a word is hilarious, but at times heartbreaking, and this book is a perfect mix of both.

I loved Julian, he was so dark and conflicted, but sexy as hell. I loved that he didn't like public places where women swooned over him, it gave him just what the doctor ordered to be a great male lead.
Could not help but to love Grace as well, she saw Julian as a human being and not as a mystical creature, a love-slave. She wanted to help him adjust to where he was, and this is bit heartbreaking; she was the first women in 2000 years who wanted to give him the dignity to wear clothes, which he didn’t know how to handle…

I did not expect this book to be so good! I was very pleasantly surprised! This book works well for you if you want a break from vampires and werewolves, but still want your Paranormal Romance kick!