"Conrad's brothers imprison him in an abandoned manor, there a ghost, an exquisite creature, torments him with desire, leaving his body racked with lust and his soul torn as he finds himself coveting her for his own." 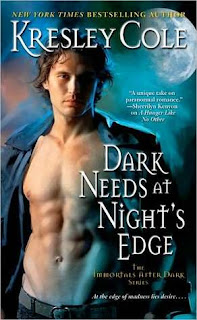 Murdered in the 1920's a burlesque dancer turned ballerina Néomi Laress inhabits her former home and current haunt, everything is pretty nice and peaceful until four men crash in through her front door one of them a crazed red-eyed madman the others call Conrad.

Néomi discovers there are such things as vampires among other Lore beings, and it seems that out of the four only the madman can see her and hear her. The three brothers try to reason with Conrad who will have none of it, swearing he will kill them.

Conrad never wanted to be turned vampire by his two brothers, he'd been fighting vampires since he was 13 years-old and to be turned into one is a betrayal like no other and eventually he sank low and killed by draining his victims making him more powerful and more mad - but now stuck in the mansion with a ghost, or possibly his own mad illusion, he begins to gain fraction of sanity when he's around her and her ever clarifying form. Soon he finds himself drawn to her, but he's dead, nothing works, and she's dead so nothing works there either, but the more lucid he becomes the more it seems she could have once been his Bride when she was alive. A Bride who can bring a dead vampire alive, but even if she could do that she'd be still dead.

And as half of the Lore is shouting of with his head, he's more dangerous to Néomi than any other thread could be...

Kresley Cole is brilliant, these Immortals After Dark novels are a pure joy to read, they are sexy, dark, tempting and full of obstacles to get through to be able to have even a hope of existing together. Dark Needs at Night's Edge is a story of a ghost and blood-crazed vampire falling for each other - now that is something I've never come across before!

The characters are compelling and fun, all the previous book characters come back and deepen the story world, and my favorite, Nix, the crazy ever-seeing soothsayer with some lucid some not-so-lucid moment is a hoot to read, I've fallen in love with her character and luckily she's the connection with all the novels so there will be much more of her.

What I love about this story is that even though Conrad is the alpha-male, Néomi is the aggressor so to speak she sexually experienced where Conrad is actually not, she's bought her own home in the twenties and remained unmarried and successful, when Conrad has been hacking off heads... It's interesting how she's the power figure of the two, the sane and commanding figure even though he's a foot taller, a big guy and she's a tiny ballet dancer.