"Ethan is determined to have fun, he can’t think of a better way to start than sampling all the different flavors the shifter-only-resort has to offer, and not the food variety. But after he meets Gwen, no one else holds any interest for him." 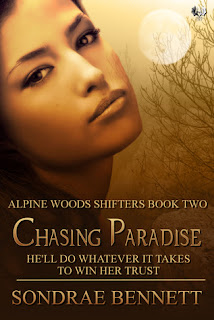 Now that the Alpine Woods Pack's Premier is mated all the attention is on Ethan, his brother. Escaping the women of the pack he heads off to a shifters-only resort planning to let out some steam and chase some tail. But when he sees Gwen, the manager, everything else loses his interest. Only he doesn't want to be mated, he wants to have fun, but he only wants to have it with Gwen which scares him.

Gwen gives into Ethan, knowing better, but after one wonderful night together she gets a rude wake up call, she hears him talking in the bar after ditching her in bed how he couldn't possibly want a woman like her, and how he’s not getting a mate that's an otter. Heartbroken she heads out for her own vacation, heartbroken and trust demolished.

Ethan turns near violent when he searches for Gwen later that day wanting nothing but to see her and finds her gone, she's run from him that just won't do. She's his and has no right to turn tail and head out. He'll find her and claim her, no matter what it'll take.

The continuation of Alpine Woods Shifters series is Ethan's story, and even though in the beginning Ethan is not really likable it soon changes as he stops fighting the need to be with his mate, and keeps having to fix his big old cockup of a grave he dug for himself. But in the process of that the reader gets to see into his softer side, his regret and that what makes him lovable!

Gwen was easy to like from the beginning, she's smart and isn't afraid to love, but when things turn sour, boy! there’s nothing colder than a woman scorned - except when primal instincts take over the couple then it's no bars hold.

I love Bennett's writing, her stories are so called “action free” and I love that, there is no outer pressure bringing a couple together or keeping them apart, her stories are about emotions, fumbles and fixes like all relationships, these just happen to be hot paranormal ones.

If you like your Paranormal Romance sweet and tempting with plenty of hot sex then this series is for you, check out Arctic Winds first if you wish, but this story can be a stand alone as well.

Can't wait to read The Wolf Within, Lyrical press was cool to give it to me for advance reading, w00t!