" Once Cadeon secures the key to his redemption, the halfling Holly Ashwin, Cade finds that the woman he thought he could use for his own ends and then forget, haunts him as much as his past." 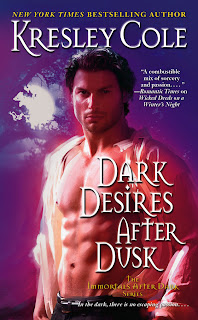 Cadeon has promised his brother Rydstrom to get him his crown back no matter what it takes, ridden with guilt for causing him to lose it. Finally a sword is made that can kill the sorcerer who usurped Rydstrom - the price The Vessel a woman of the Lore who will birth an ultimate warrior for either good or bad, depending on the father.

It all goes down the hill when Cadeon notices that The Vessel is the human woman who he knows to be his Mate, the one he cannot touch, but as Holly's Valkyrie genes kick in when she's kidnapped, there is suddenly a chance that Cadeon could have her. Cadeon convinces her to come with him to keep her safe from people wanting The Vessel either killed or bred, and to get her Valkyrie genes revoked by Groot the Metallurgist, the maker of the sword.

The thing is Holly doesn't want the crude, cursing, eternal bachelor Cadeon, she wants her platonic boyfriend, her math, her codes and her ODD habits. Finally she begins to give in, but then with her trust in his hands can he still exchange her for the sword and saves his brother's kingdom, or have her for himself?

I love Immortals After Dark novels, they are never boring! The Valkyries are the funniest group of frat boys/girls in the history of Paranormal Romance, the Lykae sexy as hell massive werewolves, The Vampires both evil and wonderfully sexy and the Demons rugged and medieval and one cannot help but love visit them all book after book. There is so much going on in Dark Desire After Dusk the plot that one never tires of reading these - this one is fine example, there are enough plot twist that you can't help reading on and on until you are finished. It's bloody entertaining!

I loved Cadeon, he curses, is bit of a slob, he's crude and it makes him such a contrast to Holly it's delicious. And he's definitely the most vocal of the IAD heroes in bed. I'm usually not very into accents in a books, cause they can go overboard, but I liked Cadeon's accent in this book, fit his cocky attitude perfectly!

Holly was a bundle of nerves, logical to fault and she lied to herself constantly but still even with her ODD of having things free and being a germaphobe she was surprisingly likable, but also extremely butt headed and strong - which was a fabulous mix and I truly enjoyed her especially towards the end where she begins to accept her Valkyries roots.

Dark Desires After Dusk is a great paranormal, sexy and tormented road trip across America and many check points to find the Metallurgist. DDAD was so much fun read, the characters well developed to grab the reader’s attention and the keep it, the contradiction were what made this book so entertaining as well as the love beginning to blossom between them and the very yummy jealousy Cadeon hadn't been familiar feeling. This book is for the fans of adventure, sexy paranormal romance and those of us who like their heroes bit rough around the edges. ;)

There isn't much negatives one can say about this series, I suppose if I had to think of one it would be that with the twisting plot I love can be little hectic and confusing at times, not enough to bother the story as you read, but it's gotten much more complex since book one ( both pro and con ), and in retrospect I can see the hecticness. Still it only takes away one star so it's not something that would ever stop me from reading these books!