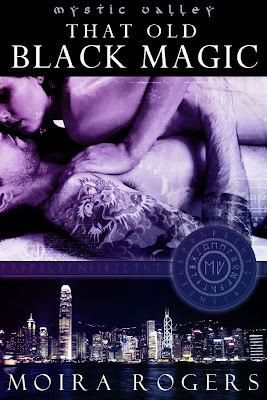 I was looking for Paranormal Romance Free Reads online and ended up finding Moira Rogers Free Reads I picked title and cover I liked, which ended up being That Old Black Magic.

That Old Black Magic is a free Mystic Valley story, offered unedited and as-is. It contains strong language, graphic sex, and a battle of the sexes involving handcuffs.

"The job was supposed to be easy. Lifting a magic charm from the house of a reclusive wizard in the middle of a swamp is a breeze for Max, a shapeshifter who has made his reputation by putting an end to dark wizards and the evil magic they use. Getting locked into a closet with an infamous thief wasn't part of the gameplan, but Max has always improvised well...especially when a hot woman is involved. The one thing Max didn't plan for was the possibility that Polly would beat him at his own game."


Alright, first, I feel I should blush reviewing this because it was seriously hot!

Max's character is interesting from the very beginning, he's bit rough being a shape-shifter, a wolf. But he's got a nice analytical way of approaching things, all business - until he meets Polly Cassidy who makes him forget about business and give into that part of him that's driven by basic needs... and this is where it gets hot.

The chemistry between Max and Polly is charming and then turns to steaming hot in six seconds flat, and doesn't stop. The play of cat and mouse continues and it is makes-me-giggle kinda good.

This is the first full out erotica I've read, and I don't have anything bad to say about it!

Now what good I have to say about it is that I love Moira Rogers' writing and have to get my hands on some of her Paranormal Romance!