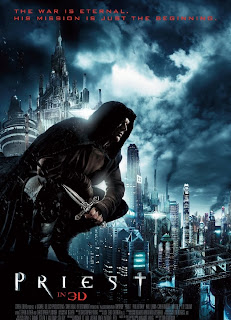 "A priest disobeys church law to track down the vampires who kidnapped his niece."

Bit more precicely this is a movie for those of us who appresiate Dystopia - the fight between vampires (not human) and men have been everlasting, the end result is that humans now live in fortresses protected by the Church (eerie slogans and church/police state), that has strayed heavily from it's purpose, it's warriors the Priests eradicate the vampires driving them into extinction and colonies, or so it seems. Now the Priests are useless forced to assimilate to the life in the guarded cities. Good for nothing.

It is when when a stranger comes to a Priest's appartment in one of the Church controlled cities and tells of the attack on his brother's home and the abduction of his niece that the Priest defies the Church and sets to bring her back or kill her, depending if she's made a vampire slave or not.

Very much worth watching if you like your vampire killers with a black mood and highly leathal and your imaginary world once destroyed to wastelands. I recommend this movie, to those of us who read Dystopia and Urban Fantasy, it's a gem in that regard! (Out in May 2011)