REVIEW - NO REST FOR THE WICKED 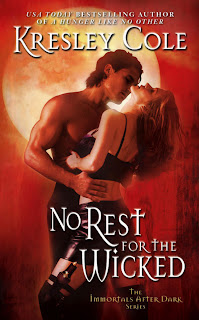 Sebastian Wroth didn't want to be made a vampire, but his brothers made one of him anyway as he lay dying. He has hated his existence for 300 years and when a small woman with a wicked sharp sword comes to slay him he doesn't but up a fight.

Kaderin the Cold Hearted, most ruthless vampire hunter of the Valkyries hasn't felt anything sense thousand years ago when she was granted her wish to be emotionless after her sisters were killed in the Valkyrie-Vampire War. But now as she's about to kill the vampire who doesn't lift a finger to stop her she halts, and hesitates.

The unimaginable happens, Sebastian's heart begins to beat, he's found his Bride the only woman who can make his become alive again - and Kaderin feels for the first time in thousand years.
Things get bit hot and heavy and Kaderin is freaked out beyond sense and flees Sebastian's Castle.

Kaderin dashes off to compete in the Lore's most infamous scavenger hunt game 'The Talisman's Hie' to loose Sebastian from her tail - but he finds her and is determent to help her and win her even though she swears she hates him and will get rid of him.
But it's very hard to fight fated attraction and soon both of them feel their control slipping.


❝She was a perfect killer. She had been for one thousand years, half of her interminable life.

"Did you hear that?" he asked. The eyes that had been pleading for an end now narrowed. "Are you alone?"

She quirked an eyebrow. "I do not require help from others. Especially not for a single vampire," she added, her tone growing absent. Oddly, her attention had dipped to his body once more--to low on his torso, past his navel to the dusky trail of hair leading down. She had a flash imagining of grazing the back of one of her sharp claws along it while his massive body clenched and shuddered in reaction.

Her thoughts were making her uneasy, making her want to wind her hair up into a knot and let the chill air cool her neck--

He cleared his throat. When she jerked her gaze to his face, he raised his eyebrows.

Caught ogling the prey! The indignity! What is wrong with me? She had no more sexual urges than the walking dead vampire before her. She shook herself, forcing herself to remember the last time she'd faltered.❞ 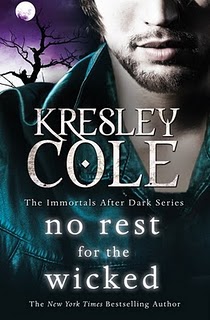 No Rest For The Wicked is yet another Immortals After Dark novel that you can't but down!

Sebastian is wonderful, slightly awkward having been bullied in his human years for being too big and clumsy by the women in his village, which now sets interesting chemistry between him and Kaderin as he sets to win her into his life.

Kaderin is tough as friggin' nails, she wants to be emotionless and seeing her adjust to emotions again is so funny. I especially loved when Sebastian notices her further away as the games are about to start when she flips Bowen the werewolf off and then turns to gape at her own lifted finger in shock. She's likeable but not as fun to read as Sebastian.

Yes, I am officially addicted to this series! No Rest definitely solidified that with fast pace, sizzlingly sensual thrill ride with dragons, serpents and hidden treasures not to mention to scorching hot sexual attraction between Kaderin and Sebastian!

A PNR must read series!