This the first Virtual Book Tour I ever signed up for, few months ago, I've hosted before this, but this was the first I signed up for mainly because I love mysteries and how could I not love a cowboy boots wearing detective! 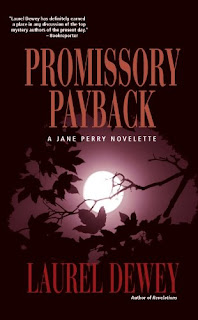 Jane Perry is tough as nails detective with Denver PD , the cowboy boots wearing smoker has a nag at solving murders, but not so much talking with little old ladies who have just found the gruesome remains of their lifetime friend. As Jane looks for answers she learns that no one really liked the victim an older woman who ran get-rich fast scams, making money and making other loose theirs. With Karma is a Bitch lipsticked on the victims back Jane goes to search who invested in this scam and who could have killed her.

I enjoyed this novella, it was great at revealing little at a time to keep the readers interest and keeping them hooked on the story! Guessing who did it, who had most to lose, or the most to gain from her death.

I really like Jane, liked her attitude, her drive, her ball busting attitude with her possible suspects – and her humor, even though some people didn’t get her, I did. ;)

This turned out to be a fun series! And I was very happy to move to Unrevealed next! 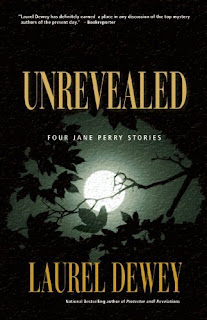 Four little stories all starring Jane, this was a superb read, I liked the little stories, that moved along quick but with nice power.

Anonymous was a story of a woman approaching Jane at AA meeting, telling a story of her sister and 9/11. I liked this one, it had a great twist and changed the whole point of the story.

In, You Can’t Judge A Book By Its Cover, Jane writes about herself what she does, how she does it and why, I liked her character in the novella so it was great getting into the mind of Jane. This story also has her appear in 6th grade for career day, and meets a special needs boy that is just bit more than he looks and following her instinct she set out to figure out why.

You’re Only As Sick As Your Secrets, Jane’s brother’s engagement takes Jane to Sedona to meet a New Age “shaman” as part of their engagement but she can’t help noticing something familiar that she can’t quite put a finger on, but something that brings on memories.

Things Aren’t Always What They Seem, after witnessing another bloodpath Jane’s in a bar, though she shouldn’t as she’s now sober, in AA. Just before ordering a drink she sees an old friend in the bar, one who’s worse for wear as well.

These short stories were really fun to read, interesting and like little tidbits on the mind of Jane. If you’ve read Jane Perry Novels before you want to read this one as well!

Tomorrow
and for the rest of the week!

I'd Rather Be Reading At The Beach