GUEST BLOG : TRICKS FOR INSPIRATION AND THE SYNOPSIS FROM HELL! 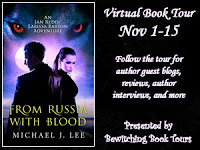 Welcome to Michael J. Lee the author of From Russia with Blood to For The Love of Reading!
( Want to read my 4 Star Review of From Russia With Blood? Click here! )

Lee has come over for a visit with a great Guest Blog for you all to read, so without further babbling, here we go, read on!

Tricks for Inspiration and the Synopsis from Hell!

A lot of things have to happen before I begin a story. First I have to have an idea and it has to stick.

Ideas are tricky things. They can sound great on their own but unless they really light a fire inside your brain they aren’t much good. I’m constantly looking for new story ideas. Lists are a good place where I start. I love lists; lists of great movies, great books, great heroes, TV shows, scenes. I write down lists and then look at them hoping for a burst of inspiration.

I’ll play the mash-up game, combining ideas together. That’s how From Russia with Blood got started. I’ll throw ideas together to see if they sound good. Mash ups are sort of like fusion cuisine, just because ingredients are separated by thousands of miles doesn’t mean they don’t go together nicely.

But getting an idea is just the start. That idea has to become a story and for me that doesn’t happen until the idea starts to take on a life of its own. That’s why I’ll keep dozens of loglines in the back of my head. I once heard a musician say during an interview that he never writes his ideas down; that if they weren’t good enough to remember they weren’t good enough to write down. That’s what I want. I want ideas that I can’t help coming back to. I want concepts that won’t go away. They’re like an itch that you have to scratch.

Once an idea is persistent and won’t leave me alone, that’s when it starts to become a story. I’ll turn it over in my head a million different ways. I try to find characters. Once I have characters I start creating relationships and motivations. That in turn creates conflicts. This is still mostly in my head though I’ll scribble down some notes. Before I start writing I want have a very good idea of the shape of my story.

Then when it feels ready I unleash the synopsis from hell!

Most people just write a thin outline then try to plough through the blank page, using the synopsis as a guide to check periodically. That works for some but the blank page is still there.

Several years ago I learned a new way of doing things. You write your synopsis. You write down as much of the story as you have in your head. But then you just keep adding to it and adding to it. You add more details, bits of dialogue. You add whatever comes into your brain whether it’s at the beginning, middle, or end. Soon a one page synopsis is a four page synopsis, then a ten pager, then a twenty pager. I kept going until I reach a hundred pages or more. By that time it stops being a synopsis and it’s more of a proto novel.

There’s still plenty of work to do. You have to go in and change the tense back to past. You have to turn snippets of dialogue into actual scenes. But the blank page isn’t so scary any more. That’s because it’s no longer blank.

Even when you think you’ve reached the end you haven’t. Writing doesn’t begin until you’ve rewritten it at least twice. This is a long process because you have to get proper distance from something that you’ve been living with for a long time. The ones that are really successful are the ones who can kill their darlings. People who can be ruthless with their own stories get the most out of them.

It sounds like it should take years. In some cases it does take that long. Sometimes it happens almost overnight. But however long it takes the good ones leave you satisfied with a real sense of accomplishment.

Michael J. Lee was born in the Midwest and has spent time out on the East Coast and in LA.

He learned the craft of screenwriting the hard way, as a barely paid reader. That’s how he got a good feel for writing form and the craft of storytelling. His approach to a story is a lot like Bruce Lee's approach to fighting, absorb what is useful.

Lee published his first paranormal romance, My Frankenstein, recently. It's been an adventure – and now he’s on to book 2, From Russia with Blood.