REVIEW - DEMON FROM THE DARK

"Malkom Slaine: tormented by his sordid past and racked by vampiric hungers, he’s pushed to the brink by the green-eyed beauty under his guard." 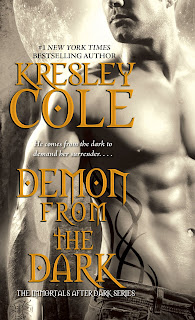 Held captive in a prison by the Order, humans aware of the Lore creatures determined to eradicate them, Carrow a powerful witch of war and enchantment wears a collar that nulls all her powers, all around her other lore creatures are similarly jailed. What they ask of Carrow for the release of her and Ruby a seven year old witch whose mother has just been brutally murdered , is that Carrow travels to the realm of Oblivion a hell plane and retrieve a Demon-Vampire hybrid to them. Carrow agrees, feeling like Ruby is now her responsibility, after all they share same blood as well.

Malkom has had a life of constant shame, trial and killing, he’s escaped to the mountains to the only water source of the people in town some miles away, feared by even the sickest creatures and demons he guards his only source of independence. One day a portal opens and a woman appears before him, she’s taken hostage by Hell plane demons and as he eradicates the demons his body responds to the woman, his vampires side sees his Bride the woman who bloods him making him able to breathe again, feel blood course through his body again, and well, have sex again. His Demon side recognizes his Mate, and demands she be claimed. But the woman fights him and eventually escapes him , but she’s in his land now and he’ll find her and have her.

Seducing Malkom was on the list but seeing the seven foot, muscle laden dirty man with grease hair, she wants to take it all back and take her chances elsewhere, but the forest is more dangerous that she could have imagined and she ends up needing him more than she could have guessed. Negotiating a temporary peace when one only speaks Demonic and one English, it takes trial and error and a lot of hand signals to figure out an arrangement. Now Carrow has 6 days to trick the smitten Vemon through the portal or she and Ruby are dead.

I’m reading through these books like a fiend, but I simply cannot help it! The world Kresley Cole has created is amazing, delicious, charged with such temptation it’s the definition of a hot read. And she never forgets to add trouble, difficulties that would have a weaker creatures on their despairs.

I love it that Carrow thinks she can take care of herself but has to depend on her Vemon as her powers are dependent of feeding of happiness, and Malkom’s happiness is only related to her, so she has to keep him happy as well.

And I loved Malkom, he’s a brute, sure but he’s also passionate, tortured and broken and her betrayal is something he might never be able to forgive, still he wants her, feels for her and is determent to keep her whatever it takes. There is definitely a very dark side of him that even Carrow faces. But it makes him so much more the good guy when due.

I loved this book! I loved the sinister forest, the hellish creatures, Carrow and Malkom’s passion and self-enforced chastity, I loved the idea of the order bringing them together only to break them both and their hearts, I loved Malkom’s rage and gentleness with Carrow and I loved Carrow’s resilience and resolve.

In one sentence, another Cole must read!

"Just as she dragged the weapon into the brush behind her, the attacker plowed into the clearing.

Carrow craned her head up. And up . . . She lost her breath.

The being's body was nearly seven feet tall and splashed with blood. Large horns curved back from above his ears. His lips were parted, exposing upper and lower fangs. Another demon.

And, gods, this one was big. His broad chest and brawny arms were covered in a mesh chainmail shirt, his muscles rippling with strength under the metal. He was clad in leather pants, and they too were spattered in crimson. His long hair was tangled around those horns and hung over his dirty face. A sparse beard covered his cheeks.

Surely, this couldn't be . . . him. Her target. Nothing about his appearance indicated vampirism. Please don't let it be him.

When their eyes met, she gasped. His irises were a light blue, as described in the dossier. Severely disturbed? Violently territorial? Affirmative.

The blue flickered, turning blacker by the second, usually a sign of lust or rage in a demon. Neither boded well for her.

Just as she studied his appearance, his gaze raked over her body, over her hiked-up skirt and bared thighs. At once, his horns straightened and flared back, signaling his attraction to her.

When he raised his face, his eyes narrowed, as if with recognition. He clenched his huge hands into meaty fists, then opened them, splaying his claw-tipped fingers. Again and again he made fists, then released them, like he missed something he'd long held on to.

His shaft was hardening—impossible to miss that. When he sucked in ragged breaths, grasping at his chest, a ridiculous suspicion arose, but she tamped it down.

This demon looked to be on the razor's edge of lust. For all Carrow knew, he'd been out in this wasteland for centuries without a woman, as hard up as Asmodel.

And if she didn't figure out a way around it, this one was about to be on top of her, his hulking body heaving over her.

"I-I'm asking you not to hurt me," she said, studying his expression. His harsh face evinced nothing, no comprehension of her words. So no English. Trothan native? Check. His only reaction was an ever-growing erection.

Just as she'd begun to suspect he was beyond any communication, he slammed a fist over his chest, then pointed at her, rasping something that sounded like "Ara." His voice was rough, as if it'd been dragged over gravel.

When he stalked closer, she spied a tattoo, a large one that looked like black flames licking up his side, his right side.

Hekate help her, this was Carrow's target, Malkom Slaine. And the Order had been woefully mistaken. There'd be no coaxing him anywhere.

Change of plans. She wasn't going to lead him to the portal. She was going to lug his unconscious body there. After repeatedly stabbing him."