BLEEDING HEARTS - REVIEW AND GIVE AWAY

"Marek is drawn to Sophie, her light and kindness, a stark opposite of his life as one of the Demivampires, a creature evolving to be a vampire, one of the dead soulless monsters.
Marek suspects she's a Sophia Oracle a woman with the essence of Isis with the power to help the demivampires, to stop the evolution to something straight out of nightmares." 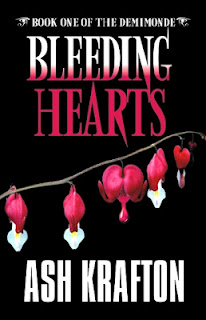 Sophie Galen has a great deal of empathy for her fellow man, she's an advice columnist, destined to help people, unable to turn another way, but when she meets Marek she sees a man tortured and dark, and she knows he needs her help, wither he wants to acknowledge it or not.

Marek is drawn to Sophie, her light and kindness, a stark opposite of his life as one of the Demivampires, a creature evolving to be a vampire, one of the dead soulless monsters.
Marek suspects she's a Sophia Oracle a woman with the essence of Isis with the power to help the demivampires, to stop the evolution to something straight out of nightmares.

Bleeding Hearts was absolutely amazing reading experience! Krafton writes with heart, emotions and skill and it shows! I absolutely loved the language, it was perfect, engaging and entertaining the reader. I rarely come across books so well written, but Bleeding Hearts was so enjoyable to read that you could tell the first few pages in that is was going to be great!

The plot was deep and thorough, this book was an introduction to the demivampire world, everything got told, and it was done gradually over time while the plot still moved on and the characters become people instead of staying as just mere characters. I loved the subplot, and it kept nagging in the back of my mind as the main plot proceeded, loved it!

The characters were completely believable, they shared common emotions, big and small and they all became likeable and some lovable. Sophie, in who's point of view the whole book is in, you can't help but love she's generally sarcastic in the wholehearted way and not just when it suits the story. She's really wise and kind, without being a push over or stereotypic oracle. She was so entertaining to read, a superb heroine!

The romance was in the background, there was some but not much, I loved Marek's passion and intense focus on Sophie but seriously who dates and waits over a month to hit the sack together when the attraction so obviously is there. That was the only thing that lowered the rating of this book - I would have wanted more romance, it wouldn't have had to be graphic or anything, but I needed to have it there. But it's no more than a ½ star knowdown as the book is so good even without the romantic element being stronger.

In all Bleeding Hearts was a super read! And I highly recommend it to Urban Fantasy lovers and Sweet Paranormal Romances fans - and if you aren't a lover or a fan but can stand vampires give this ago, the writing is fantastic!

The author, Ash Krafton is giving away one e-book of Bleeding Hearts to one lucky reader here so take part in the Rafflecopter!
If you do take part, answer this question in the comments:
"Do you like your vampires tradional or with new twist?"