THE COWBOY AND THE VAMPIRE - REVIEW

Day 1 of "The Cowboy and The Vampire" Weekend!


"Reporter Lizzie Vaughan doesn’t realize it, but she has 2,000 years of royal Vampiric blood coursing through her veins. Neither she nor Tucker, her cowboy lover, has any idea that Julius, the leader of the undead, has a diabolical plan to reign over darkness for all eternity—with Lizzie at his side." 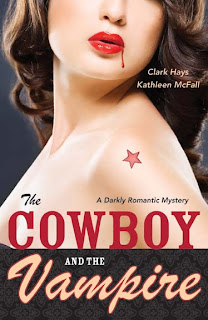 Read the authors' Guest Blog "Cowboy or Vampire?" A field guide to help you quickly spot the difference between Cowboys and Vampires... Part of the The Cowboy and The Vampire Weekend!

Living in a small town of LonePine Wyoming, Tucker has spent his life on the ranch in the company of his dog Rex and his horse Snort. Then he meets Lizzie, a reporter, in town doing a piece called “The Last Cowboy”, the New York City girl finally wins/wears him over and the two begin a long distance romance.

Lizzie’s putting finishing touches on her newest article on vampires when she’s invited to a vampire gathering in an upscale NY art gallery. Expecting piercings, lots of black and fake dental wear she’s shocked to witness a bloody massacre by sophisticated self-proclaimed vampire Julius. Lizzie escapes to LonePine to be with Tucker while she tries to figure out what the hell happened in New York.

But when vampires arrive to LonePine and forcefully remove Lizzie from Tucker’s care the cowboy has to head to New York with Rex to save his girl from the vampires who want Lizzie to become their Queen of Uncreation: the destruction of Adamites, the destruction of humankind.


"About that time Rex quit his barking and stood wagging his little stump of a tail and whining. The headlights shut off and the door opened up and Lizzie stepped out. "Hey, cowboy," she said. You could've knocked me over with a feather.
"What the hell are you doing here?" I stammered and she walked up as natural as can be.
"Is this a bad time? I could come back later," she said smiling.
I just drew her into my arms and kissed her for all I was worth and felt her pull herself tight against me. Standing there we were able to say hello without words for better of ten minutes. Then we moved inside and continued saying hello, still without words, for better than two hours." 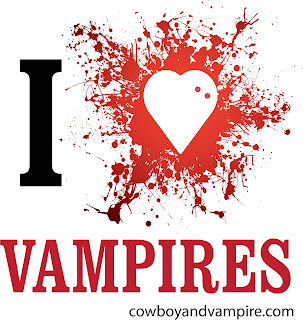 I’ll begin by saying I love mysteries, I love cowboys, I love vampires and I love this book!
You know how you expect a lot from a book, cause it seems to have everything you love, and then it turns out to be mediocre? Well this book isn’t one of those!
This is in fact in the top five books I’ve read this year, and I somehow knew I was going to love it when I first saw it online. Now let’s move on to why it’s so good!

The characters are great, Tucker is your quintessential Cowboy, he speaks, acts and thinks like a cowboy (the mental dialog is one of the best parts to me about the book), he has attachments to his animals and down-to-earth sensibility about what needs to get done, be it fix a fence to keep them darn alpacas of his land or going after his girlfriend, abducted by the evil undead vampires.

Lizzie has the through fire reporter attitude without the over the top exaggeration, she strong, stubborn and pigheaded (in fact it takes quite a lot of convincing her that vampires are real and that she’s not surrounded by delusional nutjobs, where Tucker has the benefit of witnessing them “in action”) but in the humane way that she has vulnerabilities like any human would. She’s great match to Julian who is deliciously supercilious, prophet syndrome suffering royal bloodline vampire pain in the ass.

This book has a multiple point-of-views,  having Lazarus, Julian, Elita or Sully tell the story forwards makes the story world seem so much more real, which means you get ten times more invested in their lives.
Out of the supporting characters my favorites were Elita, a seductive evil vampire who refuses to recognize that’s she’s not as 100% evil as she keeps saying she is. And Lenny, the LonePine’s lone militia, a paranoid and conspiracy theory wielding man who helps Tucker out in creating some vampire takedown weapons.
And let’s not forget Rex, the dog is a great comic relief that never leaves Tucker’s side.


"The first couple dozen time those damn alpacas trespassed, Rex rounded them up and send them skittering home like the champion cow dog he is. Eventually, those goats took to spitting on him and so damaged his pride that he now refuses to even get out of the truck when they're around. Cow dogs are touchy about that sort of thing. This morning, he was sitting in the driver's side looking nonchalantly the other way like he was dreaming of a better place, the kind of place where dogs don't get spit on by goats." 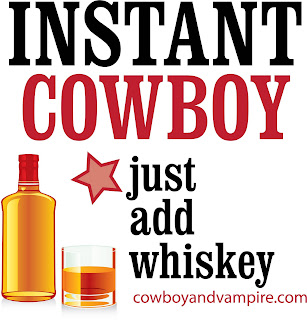 The writing is witty, easy flowing and engages the reader, you can get lost in this story without those irritating lingual potholes and speed pumps that can make stories tumble. The Cowboy and The Vampire is written really well, great in fact! This isn’t your garden variety romantic story. You can tell this book is written by people who know their poetry and their fiction.
The Cowboy and The Vampire  isn’t just written well, it’s also very funny, some of the best bits provided by the relationship between Tucker and his dog Rex, but also Tucker’s Dad creates lighter moments, where Julius and Lazarus drive the momentum of what’s at stake for everyone involved.

The Cowboy and The Vampire is a sizzlingly dark tale of thousand years old power struggle, and in the middle of it Lizzie, a human with 2000 years of royal vampire blood just waiting to be harnessed and a cowboy with one single goal, keep his girl safe and love her no matter what.

Dark and enigmatic journey from Wyoming to NY to New Mexico where vampires snap at your heels and what stand between you and your enemy is your cowboy and his sheer will to survive. Oh, and his cow dog too…

Read the authors' Guest Blog "Cowboy or Vampire?" A field guide to help you quickly spot the difference between Cowboys and Vampires...
Part of Day 1 of The Cowboy and The Vampire Weekend!

On Saturday Day 2, Clark Hays and Kathleen McFall drop by for an Interview about "The Cowboy and The Vampire", the Sequel "Blood and Whiskey", writing and what you never knew about Tuker and Lizzie before this!

And you definitely don't want to miss Day 3, the Signed copy of "The Cowboy and The Vampire" Giveaway tomorrow, Sunday 4th until dec. 18th!